July 16, 2014
Ok. After lots of debugging, fixing, and other hassling we finally got Turbomole Trial Run flash game reproduction published at Newgrounds. Although to-do list was quite short for the day (only 3 items left), it took surprising amount of time to sort everything without breaking anything. 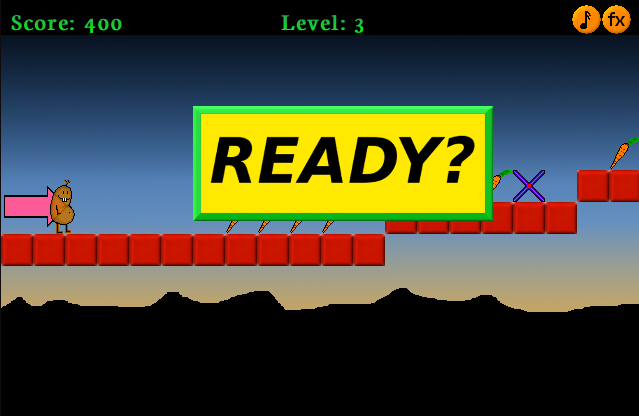 The judgement phase was passed quite fast, and during the first 7 hours there were over 300 views. Average rating is currently around 3/5 stars (about the level I was originally expecting). Gameplay seems to be working and major flaws have not been found (yet). Also the level design is quite ok at least from our own perspective.

It seems that sounds share opinions, but the current solution is about as good I was able to arrange within this schedule. For background music I was using "Fun in a Bottle" downloaded from Kevin McLeod's "Royalty Free Music" pages. All sound effects were created using the laptop microphone and Audacity software, so there might be some strange noises and poor quality in them. Apologies. :)

There are still lots of things in this game I am not satisfied with. First of all, the graphics and animation is as terrible as it was when we originally created this game. As you might guess, we are not experienced at all creating decent level graphics. So the visual look is as bad as you could expect. Secondly, there are too few levels in the game at the moment. However, we decided to start with current 16 levels and surely will create more if it appears that there is real need for them (=enough players in NG). There are also few very minor bugs left, but luckily those are very hard to see when playing the game normal way. :)

If interested, please have a try and give your rating via Newgrounds. :)