October 25, 2016
It's been a long time since I was inspired to write a tutorial. But now I am able to provide you one more idea for Construct2 use.

There are probably several ways to implement top-down 2D starfield effect in Construct2, but I think this is one of the easiest ones. By using this method, you will need only two particle objects to implement very simple starfield in no time!

From events point of view you will need only "on start of layout" event, like this:

This example was build for window size of 480x640 pixels, but the layout itself is twice as high (480x1280px). The reason for this is that particle object generates particles from single point only. User can define the size and direction of the cone, but it is not possible to change the width of the creation point. So all generated stars are not moving exactly to the same direction (motion is not parallel). You can get rough idea of layout view from the figure below. 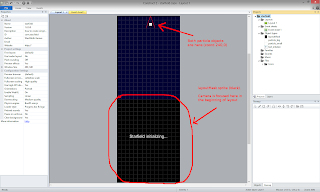 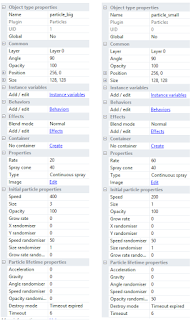 Another noteworthy thing is the lack of so-called "prewarm" function in C2 particle object. This means it takes some time for C2 to fill whole screen with stars, especially when particle object is far away from the visible part of layout. My solution to this was to use kind of an layout mask combined with initialization time: In the beginning of layout layoutMask object was set to "visible" and system time scale was increased to 30 (meaning that time runs 30x faster). After bit over one second ("wait 35 seconds" in example) layoutMask was set invisible and time scale was set back to 1. Now we have fille whole screen with moving stars. I guess this is poor man's version of Unity3D's "particle prewarm" behavior. :)