August 13, 2014
The updated version of "Turbomole Trial Run" flash game was released to Newgrounds about 4 weeks ago, without much expectations. However, today game exceeded the limit of 30000 views, which is in our opinion pretty good achievement for game like this.

I have to admit that I have no idea what is the typical number of gameplays for the average flash game. However, the predecessor games "Turbomole Xmas Run" (Dec 2013) and original "Turbomole Trial Run" (Feb 2014) were released using already deceased MochiMedia's distribution network. In principle it was possible to get game distributed to thousands of flash sites. But in the end the number sites was something between couple of tens and one hundred for both of these games. The life span for Xmas version was about 2 weeks, and for normal version bit more than a week. Also, the number of players was around couple of hundreds for each of them. So, nothing special to mention with these ones.

For updated Turbomole version we did just some minor polishing, and most of the graphics was identical compared to the previous versions. Also, the number of levels was excactly the same than in the Feb 2014 version. Biggest changes were the update of background music and sound effects and the look of dialog windows.

Anyways, game was released to Newgrounds 15th July and here is the chart about the daily views over last 4 weeks. 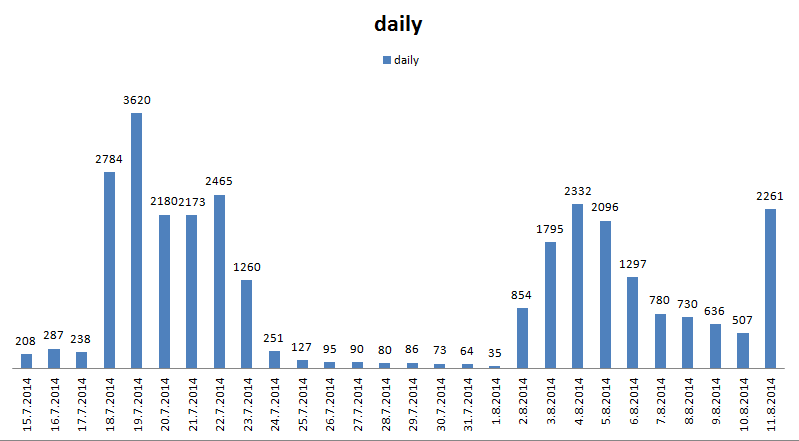 First couple of days were quite typical for our flash games. But on the fourth day Turbomole found it's way to 7k7k.com game site making the number of daily views exploding. For some still unknown reason thousands of players started to play the game, and we were amazed.

The situation normalized after an week and daily numbers of views was less than 100. We were pretty sure that game had done it's job and the number of daily gameplays sinks close to zero. But then flonga.com added turbomole to it's list, and two days later game was found also on oyunkolu.com. These sites caused second rise in the chart, and the total number of views exceeded 20k.

Third peak started yesterday and this time it was caused by oyuncini.com. Today's figures are still counting, and it seems that the number of views is clearly smaller (~1000 views). There are still two questions left: how long this peak will last, and will there be new peaks in the close future? We look forward with excitement. :)

One interesting fact is that there has been barely 1500 views in Newgrounds, and >95% of all traffic has come outside from third party sites. Respectively, advertising revenue has been very modest (around $2.50 at the moment). I guess that's because most of the gameplays have come from low eCPM countries, and in general NG flash Ads seem to have low eCPM too. Pre-roll Ads would bring a lot more advertisement income, but those are shown quite rarely (as far as I know). Actually, I am not too sure if those are shown outside NG at all.

Anyways, big thanks for you all who have had time and interest to try Turbomole game! We are currently considering new release, but at the moment other game projects are taking all available time. Maybe later this year, let's see...