Showing posts from November, 2016
Show all

We have been creating Christmas themed game for last couple years. For 2014 it was "Turbomole Xmas run" (flash), and for 2015 "Rocket Santa" (android). This year WestSloth Games proudly presents: "Rocket Santa 2016" (android, removed from Play Store). The story in the game is simple: mischievous aliens have stolen gift boxes from Santa, and he is trying to get back as many as he can. Santa can fly by using mysterious gas powered butt rocket. The amount of "rocket fuel" is limited and it can be gathered up more by catching ginger breads or gift boxes. So you have to help Santa to collect stuff and at the same time dodge nasty aliens! For this game we took base mechanics from "Flying Dachshund" Android-game, where player controlled little sausage dog by tapping the screen. Dachshund graphics were replaced with the graphics from original Rocket Santa. Also, some new graphics was introduced. So in priciple this game is kind of a
Post a Comment
Read more

My first Unity3D app is ready! 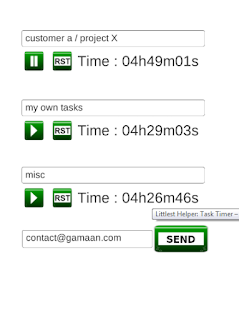 After long period of hesitating I started to work on my first Unity3D app. To get things going, I selected very small and simple concept to work with.   Basically, Task Timer is a simple tool to track time used for different tasks. Main features: 3 independent timers that will run also on background and when display is turned off Minimal design: no bells and whistles included. Just the necessary functions! Fully-customizable task names (no limitations) Possibility to export timer data to email template (in csv format) Measurement accuracy: 1 second You can use Littlest Helper: Task Timer for your everyday time tracking tasks. And it is fully up to you how to use the data generated by the tool: Exported csv data can be taken directly e.g. to Excel (or equivalent) and processed as you wish. Get Task Timer from Google Play! I think this app would be a good tool for everyone who is should measure time used for different tasks (project workers, consultants, etc.)
Post a Comment
Read more

Update 17.8.2021: Replaced obsolete Monodevelop with Visual Studio where applicable.  I have gradually started to use Unity3D for game development. So far I have been doing very small and simple test codes just to learn how certain things should be done with Unity. But now I have an example that might be of interest for other wannabe-Unity3D users, at least those who are struggling with converting seconds to HH:MM:SS format. :) So lets begin with this example. First of all, start Unity3D and create new project. This example uses the console only for outputting result, so project can be either 2D or 3D. Whichever you prefer. Create empty object to your scene ( ctrl+shift+N ), or use pulldown menu ( GameObject->Create Empty ). Select empty object and rename it e.g. to " Timer ". Add new C# script component to empty object and name it as " TimerActions " ( Add Component->New Script->write name and select Csharp as script type ): Open TimerAction
3 comments
Read more
More posts