Showing posts from March, 2020
Show all

How Many Downloads? (Real Data Included) 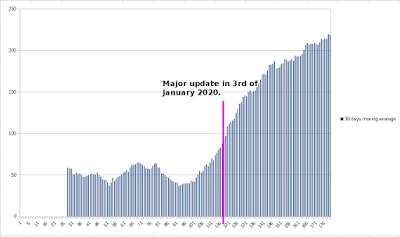 I will now present a realistic summary how "Flamingo Tap Tap Run" Android game did over the first 6 months. For that I created a graph that shows moving 30 days average for new downloads. It should give a good idea how the number of downloads has evolved after the updates. Graph looks great (really steep slope after major update) as long you don't look the scale on the left hand side. But here come the details: First major version of Flamingo game was available on 3rd of September 2019. It had just one flamingo character and there was no use for collected shrimps. This version got around 50 downloads per month, that has been pretty typical for most of our released little games. Second major version with large update was released on 3rd of January 2020. This one had total of 8 playable flamingo characters which player could buy using the collected shrimps. This update increased the number of monthly downloads to 200+ and it can also be seen from the attached graph.
Post a Comment
Read more
More posts