January 01, 2013
Background: I am creating couple of concepts, and then select at least one of them for further development. To get things going, I drafted first concept document to briefly describe a simple maze game.


The game idea for this concept should be familiar at least for Finnish people. Similar kind of a real-life "marble and maze" game is built by company called Brio. The concept document is copied below. I don't know if the initial version covers all required matters, but you are free to comment. Enjoy!

“I've Lost My Marbles!”
The ultimate game with marbles, holes, action and despair.

Many of us have spent hours twisting noddles and trying to get marble to pass the labyrinth without dropping to one of the countless holes of board. “I've Lost My Marbles!” brings traditional board game to the digital world.

The basic idea of the game is to guide the marble on the game board. This is done by using mouse or similar control system that emulates the noddles of real-life game board. Moving mouse forward-backward and left-right will incline the board to the corresponding direction, and gravitation makes the marble to move.

The target is to get the marble from starting point to the “goal hole” and dodge all other holes. 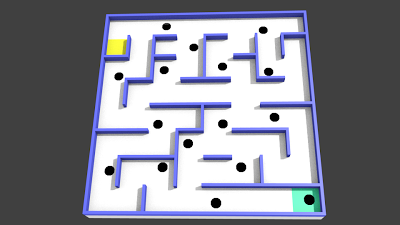 There are several labyrinth games already available, but not too many where game board is moved. Unique game boards and realistic physics will make this to differ from others.

“I've Lost My Marbles!” will also be a practice project for improving the team's skills in game development and related tools. So this game has also educational value.

The target audience of this game is intended to be anyone who has nostalgic memories playing similar kind of a game in real world. The friends of labyrinth and maze games will also be happy to play “I've Lost My Marbles!

Game physics and 3D graphics engine are required to implement this game. Ready-made engine is preferred to speed up the actual game development. Engine must also be free-of-charge, because of the low (nonexistent) budget.

The target platform in the first phase will be web-browser running on the top of Windows, and later possibly on Linux and iOS.

Simplicity is the guiding principle in the visual outlook: Game board is build on simple blocks, and only few colors are used for maximize the clarity. Marble may have some pattern to better visualize the rotation when moving on the game board.

Production phase is started with prototyping round, and the outcome from that is a playable prototype with one game board, including steering with mouse and a marble rolling on the board. Target is to achieve a playable game physics and smooth gameplay. Prototyping phase will take approx. 2 weeks.

When prototype is found to be good enough (criterias are defined in detailed design document), the actual game production phase begins. At this point, game physics and gameplay are finetuned, and more levels are added. Also, game start/end screens, time counter, high-score list, and other details are implemented. Actual game development is targeted to take approx. 4 weeks.