July 15, 2014
As defined in the "roadmap", we decided to make updated versions from our two flash games. Because the plan was made and the work seemed to be quite straightforward, I started evaluating and updating "Turbomole Trial Run" flash game.

Game was originally created with Stencyl and published using the Mochimedia distribution network. I had no intention to do everything again from the scratch, so I dug out the latest development version from my backup disk and started to explore how game was implemented about half an year ago. I have to admit that my old "code" (i.e. Stencyl blocks) is not too easy to understand, mostly because of the bad "coding" style and missing commment blocks. But anyways I got an idea what I've done before, and started planning the modifications.

First task was to remove Mochimedia API blocks out from the game, and replace them with corresponding Newgrounds stuff (leaderboard mainly). I also started new game project at Newgrounds to get an API ID and encryption key. Then it was time to make some playtesting to get an idea what could be done better.

"Turbomole" game itself works as before, and we did not find any major flaws at this point. But there was still something to be improved: the original background music was annoying, and I replaced that with a fresh one from Kevin McLeod's collection (incompetech.com). I hope the new one will last longer. :)

After replacing background music it was time to re-evaluate other sound effects. I replaced couple of them with "better" ones, and currently I am quite happy with them. I wanted also make sure that muting the music and sound effects works fine, and noticed that there were something wrong with the original implementation: it was not 100% sure that music started playing every time and there was also some uncertainty how mute buttons worked in the original version. So I re-created the mute behaviors and added buttons to the HUD view of the game also. During the implementation work I found out that there is an easy way in Stencyl to make an object to disobey a camera: just use the "anchor <object> to screen" block, and that's it. I have done this in the hard way in the past, so now I learned something new. :)

Currently, there are 16 levels in the game. You have to pass a level to be able to play the next one. The original implementation was done so that it was not possible to replay level after passing it without going to the menu first. It just came to my mind that someone might be interested to play level again to get the maximum possible score. So I added "replay" and "continue" buttons to the "level completed" dialog to make the game experience a little more comfortable. 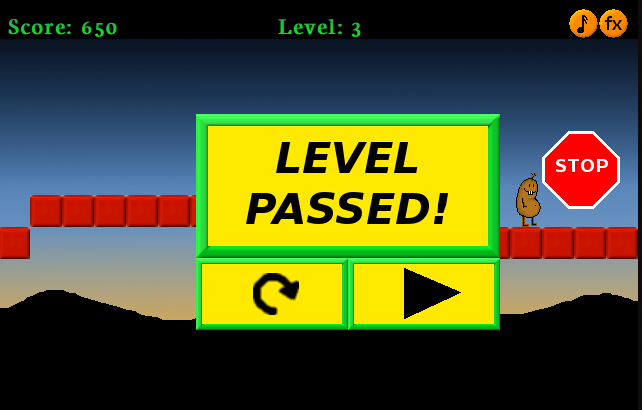 We did playtesting after every modification and at some point found a major problem in one level: mole was stuck somehow between the obstacles and the edge of the screen. To fix this I had to resize level a bit and after that game was working fine. It is still a mystery why this happened, but I think the root-cause can be found from the modifications I did during the evening. So maybe I spend a while looking at the game logic and try to find out what happened there. This just to be sure that similar problem does not occur in some other level after releasing the game.

At the moment the to-do list for "Turbomole" is quite short:


Game will be released to Newgrounds after these tasks are done (probably this evening).

Original idea was to add more levels and do general polishing to the gameplay and visual outlook. But I think we will release the game to Newgrounds maybe today and see what kind of comments and improvement ideas we get from players. It is very straightforward to add levels to this game afterwards, so they can be added as they are done and throughly tested.