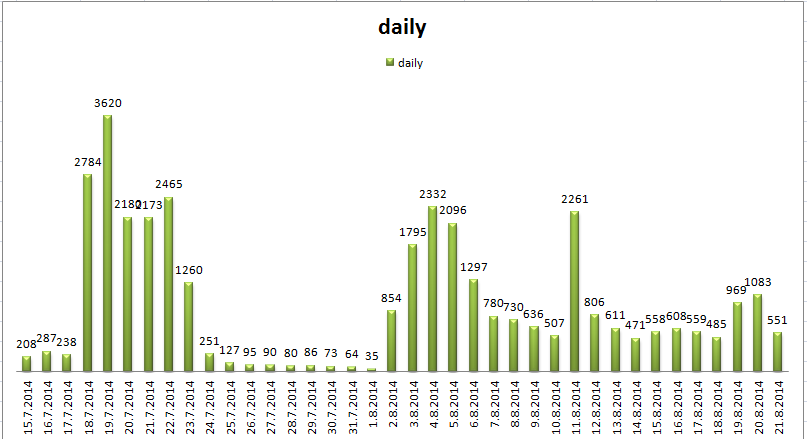 Total number of views is at the moment 36105, so there has been in average 950 views per day (source of data: Newgrounds Statistics). Still going strong, although the momentum is gradually slowing down.

I decided to publish this game also on Kongregate, because it required very minor modifications. Basically, all I had to do was to remove Newgrounds API stuff and replace them with Kongregate equivalents. Since game was created with Stencyl, it was just matter of removing some blocks and selecting the new ones from the list. Another thing to do was to setup the Kongregate Statistics for the leaderboard implementation. And, of course, you had to remember add the block called "Setup Kongregate API" in the startup scene, to make sure that everything works as expected.

BTW, there has not been too many views yet on Kongregate, but at least one comment was already received:
"Actually a really fun game. Needs work on the art though! Should be called turbo potato as well! (Greatolded)".


As I have mentioned before, we really need to consider if it would be possible to get an artist to work with us in future game projects. Currently, I see that as the only way to improve the visual side of our games. But the main problem is that we do games as a hobby, so we are operating with zero budget. Free assets from different "open-source" collections in internet might also be a choice, but let's see...