September 08, 2019
Edit 9.9.2019: It seems that Flamingo Tap Tap Run is our most downloaded game after one week from publishing. However, I have to admit that few tens of downloads is enough for this "achievement". :)

My emphasis with this project was on character animation because my previous games have been using animations for maximum of 4 frames per move. Therefore, this was first time I used Spriter tool for creating and extracting complex animation spritesheets for Flamingo movements. For example, I was using 64 frames for walk animation. After all messing and fumbling result looks pretty ok and at least character animations are lot smoother than in my previous projects. 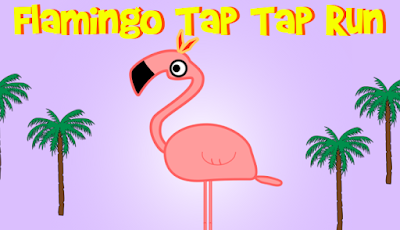 Game logic was created with Unity3D and C#. New tricks (or structures) for me were delegates, that were used to handle status information between GameManager and Player. The overall quality of the code is again improved compared to my previous games, but I think there's still something to do better. :)

There were some challenges during the process, and the toughest one was migrating to latest Unity during the development phase. Some plugins were conflicting with each other and I had manually clean up data caches and temp directories under project folder. It just took some time to know what to do. More about this topic can be found from my previous blog article.

This game is also the first one where I was using Android App Bundle (AAB) instead of APK package. At least the download size is bit smaller and there is no need to deliver separate APKs for each target platform anymore (ARMv7, ARM64, x86). Also, scripting backend was changed to IL2CPP to get 64bit Android support working. Build time with this setup seems to be clearly longer than before, but it is tolerable when building small game like this.